Why measuring wellness in Australia can provide a better indicator of society's progress.

Last month, Labor announced a proposal to create a ‘wellbeing budget,’ similar to that introduced in New Zealand. While Josh Frydenberg found this a ‘laughable’ idea, there is nevertheless a logic that one of the wealthiest countries on Earth could do more to focus on those struggling at the margins. Dr Megan Weier (@MeganWeier) and Isabella Saunders (@Isabellasaund) share the logic for the newly-introduced Social Progress Index, which identifies and tests indicators that could be measured alongside GDP. You can explore more on the Social Progress Index, including accessing the full report.

Why social progress should be measured

When we hear governments talk about ‘progress’, we can usually make a couple of assumptions: it should be constantly going ‘up’, and it’s almost only talked about in economic terms. Australia has had 28 years of unprecedented economic growth – but we argue that’s only one indicator of a society’s success.

Increasingly, we’re seeing both politicians and the public call for new ways of thinking about budgets and economy. The traction that New Zealand’s ‘wellbeing budget’ (and the resistance it has received from some members of parliament) indicates that Australians are wanting new ways of talking about progress.

Over the last 14 months, our team at the Centre for Social Impact have been working with the Social Progress Imperative in developing Australia’s first Social Progress Index as part of the Amplify Social Impact project. The Index has been calculated at a global level since 2013, but this is the first time that we can see where there are unique successes and challenges across Australia’s states and territories.

What does the Social Progress Index measure?

The Social Progress Index defines social progress as “the capacity of a society to meet the basic human needs of its citizens, establish the building blocks that allow citizens and communities to enhance and sustain the quality of their lives, and create the conditions for all individuals to reach their full potential.” It does this by collecting indicators that contribute to components of social progress, with the aim of answering what we call ‘universally important questions’. For example:

Finding data that could appropriately represent these components was no easy task – which may explain why we tend to rely on economic dollar values as indicators of progress as opposed to how people are experiencing life within a society. We consulted with academics, not-for-profit and peak body representatives, industry, and local and national government departments to get a sense of what a ‘wishlist’ of social progressive indicators would be, and set out to see what data was available.

We ended up with 52 indicators that made up the Index, including estimated homelessness rate, the rate of people who experienced physical assault in the last 12 months, and the proportion of people who agree that the police ‘treat people fairly and equally’. (You can see the full methodology, including the final indicators and their data sources, here).

The data is already telling us important information

This process led us to this insight into how Australian states and territories ranked (scores and rankings are available for exploration on our website), relative to one another, in overall social progress in 2018.

It should be noted that the SPI is an indicator of how socially progressive the state or territory’s policies and societies are – not the individuals who live there. However, when we see such stark disparities in scores between the Northern Territory and other states and territories, we can see that the way policy and programs are being delivered in the Northern Territory are simply not working. 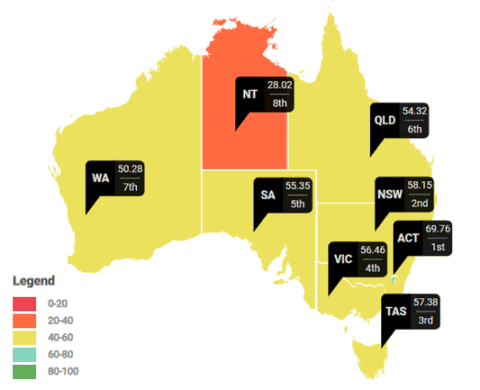 Australian states and territories generally did well on foundational concepts such as access to nutrition and basic medical care, but scored lower on social equity indicators such as access to information and communication, and personal freedom and choice.

How can the SPI help discussions around the need for a wellbeing budget? For one, we can demonstrate with the SPI results that the argument that economic progress automatically leads to social progress was just not the case for Australia. We correlated Gross State Product per capita (a localised version of GDP) against SPI scores:

The Northern Territory and Western Australia have some of the highest GSP per capita in the country, but also some of the lowest SPI scores. By only focusing on how jurisdictions are performing economically, we’re completely ignoring what social realities look like for the people living in those communities.

Putting the Index to use – and improving it over time

This is intended to be the beginning of a conversation about measuring social progress. An index is only as good as the data that is available, so over time we would hope that the use of this Index can help to highlight where there are gaps in data. Specifically, we believe that data collection priorities are:

How can the SPI help decision-making? We’re planning on taking the SPI results on the road, visiting State and Territory governments to talk through the SPI results to understand where there is success in policy, but also where there are specific areas that require targeted policy.

We also want the SPI to be a useful tool for the not-for-profit and for-purpose sector to advocate and elevate their cause. Most people can find their cause represented somewhere in the Index, even if their specific indicator wasn’t able to be included. We hope that it can be a tool that can be used to advocate for funding or political attention.

We’re looking at creating a network of people who are committed to talking about social progress in Australia, and using the Index as a way to help guide the conversation towards inclusive growth. To talk more about the Index, or to join our network, please do get in touch! 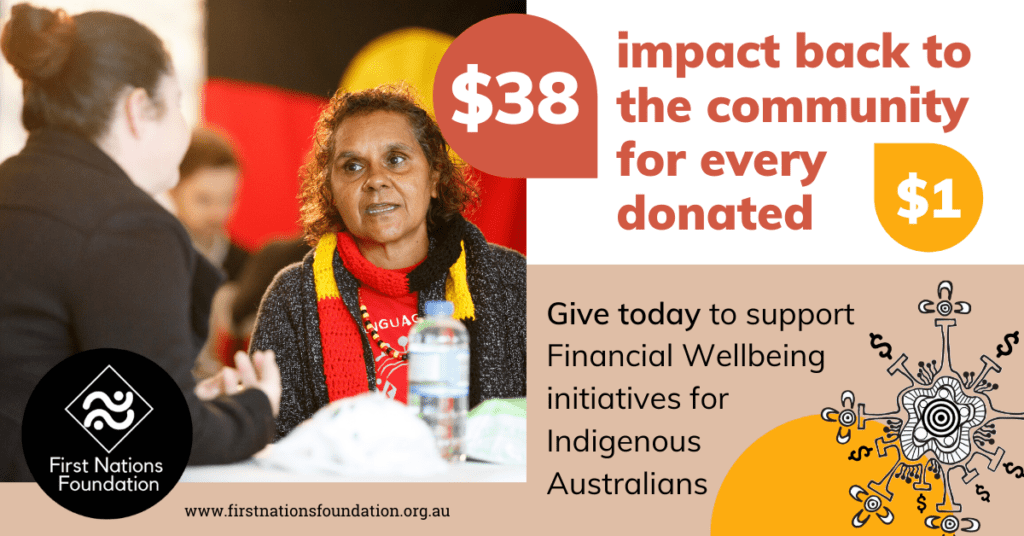